We stock the biggest range of Two Tone and Black airsoft sniper rifles available on the internet. We have all of the most popular styles like the l96 and the vsr11, for example. We also have all of the best-known brands like cyma, double eagle & well etc. There are sniper rifles that are powered by gas or electric but bolt action spring powered sniper rifles are by far the most popular. Once you get the perfect bb gun sniper rifle for yourself, why not improve your aim with one of our bi-pods or telescopic rifle scopes. BB Snipers are a very popular type of bb gun weapon and as such, are some of the highest in demand guns we have on this website. Because of this, we cannot guarantee that they will stay in stock for an extended period, so get them while you can! 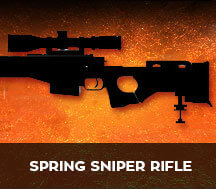 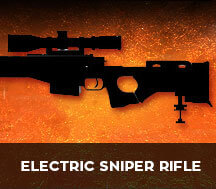 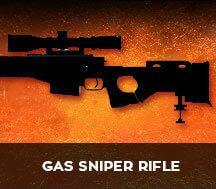 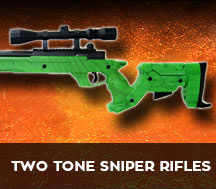 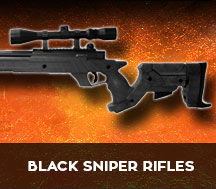 Spring Sniper rifles are the most common type but you can also get gas or electric powered sniper guns. personally we tend to avoid buying gas snipers to offer for sale on the bbguns4less website as there is more to go wrong with them, and you have to buy gas to make them work, and even though you have the gas as a propellant you will still need to cock the bolt before each shot to load the bb pellet in the chamber of the gun so there is not so much of an advantage in using them.

Most bb gun sniper rifles will have the bolt pre-greased up for a smooth bolt pull but we do also sell Silicone grease or oil for this if you bolt gets dry. do not use regular black grease like used on cars etc, use only silicone grease.

the biggest range of rifles we have is from the WELL company. most of the bolts on the WELL sniper rifles are the same, and all of them will have a similar power. the only difference between the guns is the barrel and receiver type, but the mechanisms of the sniper bolts on each rifle are the same.

Most good bipods will be made of metal and will have extendable legs so you can alter the height of the rifle to suit your best needs. there are some bipods that are made of plastic, they are normally included in the box with the cheaper guns. plastic bipods are mostly quite fragile and tend to break easily but they can be replaced with a full metal bipod if you break them as we do sell them on this site as long as you dont break the gun's rail they should fit.

When we talk about scopes and on the page they say 3x9-40 etc, this is what the numbers will mean. the 3 will be the lowest amount of magnification possible and 9 will be the highest, the 40 is the diameter of the scope measured in millimetres. if the has a E or EG after the 40 this normally means its an electric scope with an illuminated red cross etc. if the numbers say something like 4x20 this will mean that the scope is fixed and you can not adjust the amount of magnification. if it says in the sniper's description that it's a mock scope this means that its just for show and don't do anything. some cheaper scopes that come with guns will be called red dot this will most likely have a red dot or crosshair but will not be magnfied.

Spring and Gas Sniper rifles will work better with more heavyweight bb pellets than regular rifles, we would recommend you getting 0.25g pellets upwards. generally speaking, a lighter bb pellet will travel faster and possibly further but will be not so accurate, more heavy ammo will travel slower but will be a bit more accurate and will be affected be the wind a little less. the impact on hitting its target will be the exactly the same. its possible electric snipers will work better on 0.20g bb pellets but as with all of our sniper rifles, a bit of trial and error is required.