BBguns and the Law & Regulation

Are bb guns are legal or illegal?

Yes they are legal to buy, but there are some conditions that you need to consider.

Before we get to the law regarding bb guns in the uk, its first important to understand the differences between the different types of bb guns/airsoft guns. The most important part of this comes down to the colour of the bb gun as shown below. its also worth reading our article "what is a bb gun?" which explains the difference in Terminology between what a bb gun means in the uk vs the usa.

A black gun is classed as a realistic imitation firearm (R.I.F).

and a Two-Tone Gun (i.e. 50% red & 50 percent black Etc) is classed as an unrealistic imitation firearm.

Below is an example of a two-tone gun and a RIF; both guns are exactly the same in how they work power and quality, the only difference is the colour. 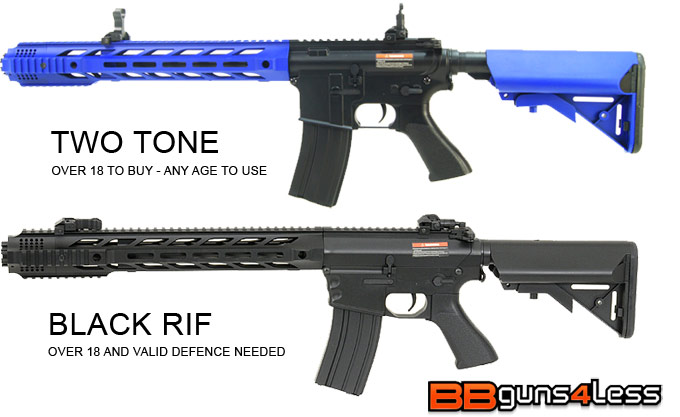 For an airsoft/bb gun to be classed as two-tone, around 50% of the gun must be finished in one of the following colours: Blue, Green, Red, Yellow, Orange, Purple, Pink or Transparent.

You do not need any type of defence (see below) so long as you are over 18 years old, to use a bb gun there is no minimum age requirement by law. However, adult supervision is recommended at all times.

This means you can buy any bb gun or airsoft gun from bbguns4less so long as its 50% in colour that's not black, but you can order a fully black bb gun from us, if it has a two toning option on the product page and you select the two-tone option, if you do this we then paint the bb gun so it will comply with the UK law.

The thinking behind two-tone bb guns is so that they can be easily identified as an unrealistic imitation firearm by the police and public, stopping any unnecessary distress. Even though two tone bb guns are easily identifiable as fake guns, we strongly recommend the moving of any bb gun whether it's two-tone or a RIF, be done with the airsoft gun in a gun bag.

if your thinking to your self, I will just buy a two-tone gun from bbguns4less and then paint it black after I get it, forget it this is against the law and could land you in a heap of trouble, also painting your bb gun black will voids your gun's warranty with us.

You dont need a airsoft licence to buy a black gun but you do need a valid defence and be over 18 years old.

Examples of a valid defence (you only need one)

1. You live outside of the UK. (if you are buying from outside the UK this law does not apply, Check your own country's law)

3. You are a British Airsoft Club member.

5. You are part of a re-enactment group.

6. You are a TV Program or filmmaker.

7. its for a Museum or an art gallery

8. you are a Crown servant

9. its for Theatrical performances and rehearsals

If you don't have any of the above, you can buy a black gun, but you must select the please two tone it option and let us paint it to make it legal for you to own. there is no difference between how a black gun works and the performance of the exact same gun in two-tone it's only a different colour (i know this sounds simple, but you would be surprised how many times we get asked this)

So now if your thinking to your self, this is not correct, "i bought a gun or i have seen a gun down the local gun shop and it was black and they did not ask me for a valid defence."

This is because what they sell in guns shops are Air Guns and not Airsoft guns (getting confusing isn't it) an Airgun fires a metal pellet and is used mostly for hunting, and an airsoft/bbgun are used for target shooting and recreational games similar to paintball and fires a plastic bb pellet that if you are shot with it, the bb pellet will not penetrate your skin and will just bounce harmlessly off you, but give you a little sting that will last a few seconds.

The airsoft bb guns we sell are intended to be for your fun and enjoyment.

Never fire the guns at other persons or Animal's all bb guns are powerful and a bb pellet hitting you or someone else in the eye is no fun, and it could potentially blind you or someone else, even if you get hit by mistake. Always use goggles/masks at all times and maybe consider other forms of protective clothing.

If someone is hurt by a pellet hitting them without their consent, it could be classed as an assault. Depending on the injury it will be dealt with as Common Assault, Actual Bodily Harm, or in the case of a 15-year-old girl shot in the eye, Grievous Bodily Harm. It’s a serious offence!

for more info see our article "are bb guns dangerous"

if you shoot someone else's stuff and it gets broken or damaged by a bb pellet, intentionally or recklessly, it could be classed as Criminal Damage!

Airsoft BB Gun Joules/FPS limit's for use in the UK

if you don't already know FPS = feet per second, The rate of speed that a bb pellet, when fired, will come out of your weapon. please note that lighter bb pellets will travel faster than the more heavy pellets.

Never ever take any type of gun into town.

The Firearms Act 1968 states, “An imitation firearm is anything which has the appearance of being a firearm, regardless of whether or not it is capable of discharging a shot, bullet or another missile.” If you take a BB gun into the streets, town, school or workplace etc. you may get arrested for this offence, lose your job or get expelled from school or worse! - police respond to any call where a gun is involved and send armed officers with real firearms and real bullets to react to the situation.

Moving your bb gun around

One of the most important things for you to buy along with your bb gun is something to move it around in. You should never just go walking around with your gun on full display in the street. even if your travelling in a car because if someone reports it, you could have armed police on you in a flash. As most of the bb guns we sell can easily be mistaken for the real thing. But aside to the dangers of mistaken identity they are very useful and will protect your gun in transit, making gun bags and cases an essential part of kit.

Can I Paint a BB Gun or Airsoft gun Black?

we also get asked a lot "is it illegal to spray paint a bb gun?" and the answer is that It is illegal to alter the appearance or paint an unrealistic firearm (two-tone) to black, making it look like a real firearm. bbguns4less only sell black Airsoft guns to buyers over 18 and that have a valid UKARA membership or have a valid reason to purchase. but it is legal to paint a black gun in a two-tone colour

Although you need to be over 18 to buy an Airsoftgun, you can be of any age to use a bb or airsoft gun, but we recommend that you be over 12 with parental supervision at all times. We only take orders on the condition that customers have read and accepted our Terms and Conditions.

The minimum age to purchase a BB gun is 18 years. An adult must supervise persons 12 to 18 years of age. No gun should be carried in a public place unless in transit when it should be unloaded and placed in a bag. Guns must not be concealed on one's person, or pointed or fired at another human or animal. Safety glasses and other protective clothing should also be worn when operating the gun or viewing.

With the VCR bill introduced October 2007, the law as it stands in the UK: (7)A realistic imitation firearm brought into Great Britain shall be liable to forfeiture under the customs and excise Acts. (1) A person is guilty of an offence if (d) he brings a realistic imitation firearm into Great Britain. (9)An offence under this section shall be punishable, on summary conviction (a) in England and Wales, with imprisonment for a term not exceeding 51 weeks or with a fine not exceeding level 5 on the standard scale, or both. We ONLY sell UK legal products and all our guns are 2 tones with one colour being bright orange which excludes them from the new laws.

From 01/10/2007 the laws regarding airsoft guns have changed for the UK. Under the VCRA Bill 2006 it is illegal to buy or sell an airsoft gun to anyone under the age of 18 years. Under Section 36 of the V.C.R Act it is a criminal offence to alter the appearance or paint in a colour of an imitation firearm to make it into a realistic firearm...

This is not the definitive guide to the law regarding bb guns in the UK, as its quite a complicated subject and I am yet to meet some yet who has 100% confidence in the interpretation of the laws.

but this page was written to the best of our limited abilities in good faith, but its best to do your own research on this subject.

also, the law in the UK has nothing to do with other countries outside the UK, inc Europe and Ireland.

Please use common sense at all times!