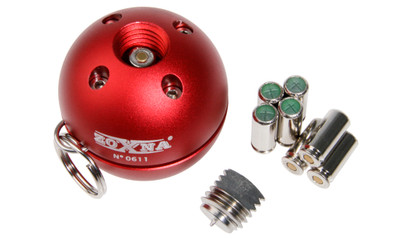 The Zoxna Blank Firing Impact Grenade can be used for various applications like military and police training, airsoft games or CQB, etc. It is made from a strong aluminium metal, the airsoft grenade is anodised in either a yellow or red colour. this grenade is in a round shape and small size that makes it easy to handle. It is also reusable and takes 9mm blanks as ammo that we also sell on the bbguns4less site. When loaded and its threw it detonates on impact making a loud bang. (when we used it the first time it actually made us jump.)

the Zoxna Blank Firing Impact Grenade is great for giving your game that extra edge.

9mm Blank Ammunition is not included, but you can buy some here.

if you do not email it to us within 7 days of your order, we will refund you the full amount of the product less a £10 admin fee. our email address is sales (@) bbguns4less.co.uk

also please take time to read the warnings below.

The carrying or handling of any Blank Firing Gun in a public area is against the law and very dangerous.

None of the Blank Firing Guns we sell can fire real ammunition, and none can be converted too. All our blank firers we sell are top or side venting and include permanent barrel inclusions to block any tries to tamper with their correct function.

Always make sure the blank gun is unloaded before trying to clean it. Avoid unnecessary dry-firing as this may cause damage.
Always make sure you and those around you wear eye & hearing protection while firing it.

When firing this gun, always keep your arm fully stretched as gas/powder from the firing of the blank exits the gun from ports or the slide/cylinder area rather than the muzzle of the barrel of the blank gun.

You must keep your hands, face, and any other part of the body away from the cylinder and top of the blank gun when firing. Do not put near your own head, face or any part of your body when firing or next to any other person's head, face or body or indeed any animal's

When a blank is fired, gas and debris are discharged from the cylinder/slide. At arm’s length, the vented material discharges harmlessly, But At close range, the venting can cause burns or serious injury.

Blank guns should only be used for theatrical, film, historical re-enactment, sporting or training purposes.

Blank guns should always be used by responsible adults and not children under 18 years old.

Blank firing replica guns should always be stored in a locked container and separate from the gun's ammunition.

Blank guns should never be carried on the street, pointed at anyone, hidden on your person, or left in your car. Do not leave them where children can get to them.

The carrying, handling, or brandishing of any gun that looks like a real weapon may be in infringement of the law, may create undue apprehension on the part of the police or other parties and could result in injury or death to the person handling the model.

The manufacturer, distributor, and retailer disclaim any and all liability for the inappropriate use of these blank firing guns.