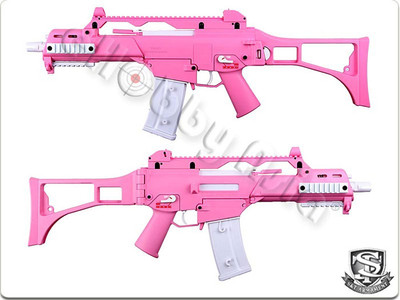 With more girls getting into airsoft, more companies are starting to produce guns aimed at the ladies. Usually, the most obvious way to do this makes it pink, but this has also been made a little lighter for the females. (though it's aimed at girls I have seen a few guys using pink guns at a site recently, so whatever floats your boat)

This is a good quality skirmishable H&K Licensed G36C Externally, nothing separating this model from other decent G36C'S apart from the colour.

The whole gun is just about entirely made out of polymer with just the handguard rails & some inner parts being built of metal. The lightness of the gun makes it a good option for the girls or yonger players but don't mistake this for cheapness or poor quality as overall feel is solid, with very little wobble.

The stock folds like the real G36C but with a moulded plastic butt pad instead rubber pads found on most other G36 models, you fold the stock by pressing the white button on the left side of the stock when the stock is swung to the right But of the gun you can secure it by hooking it over the little notch, this turns the gun into an effective CQB weapon and shortens it significantly for transporting.

There is a sling mount on the left side of the locking plate to take the load of in long games. The lower receiver consists of the grip and the ambidextrous selector assembly that has 3 settings safety, semi and fully auto.

The mag-well can be removed like all G36's and locks the 400 round magazine in very well. The magazine released from the gun by pressing the large paddle located at the rear of the mag, this is also ambidextrous.

When you pull the charging handle (ambidextrous) back, it expose's the hop-up adjuster, this doesn’t lock back, but you can push the handle down at the top of the receiver to keep it locked back.

The handguard is the normal short G36C design with rails painted in white. this is removed by pulling one pin out of it, when its take off you have to access the battery compartment. On the handguard, you will also find the front sling mount point.

The outer barrel is nylon fibre and threaded 14mm. The top rail system has lots of space for optics.

The front sight sits on top of the rail and is fixed while the rear sight is adjustable. However, you need a tool to do it.

The magazine that comes with it is a molded plastic hi-cap, which holds 400 rounds and has the features you’d find on most other G36 mags. The magazine feeds well into the gun with hardly any misfires. The g36 will work with most standard compatible g36 magazines on the market.

The gearbox is built like a tank with loads of metal at the front of the shell. The shell is equipped with 7mm steel bushings, and there is a small window that will allow you to decompress the spring using a tool. Coupled with the quick change spring guide and this thing is more easy and quick to take apart than most rifles.The gearbox has steel gears, a polymer piston with steel teeth and ported head, and an unported cylinder.

The hop-up unit is made of plastic and has an easily adjustable drum dial to adjust the amount of hop. The bucking is a split nub design that very likely helps with its skirmishable accuracy. The inner barrel is anodised red and is 247mm long.

Range and accuracy were, very skirmishable hitting a man size target at 125 to 175 feet without issues.

Here is a collection of articles to help give you an informed decision to help you buy the best electric rifle that suits your needs. this advice is not specific for this gun but electric rifles in genral.