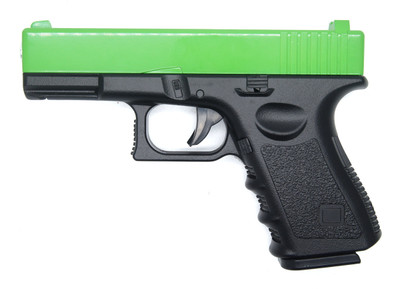 This is a loose replica of A Glock 23 Pistol (In the video Dom says G17 – they are very similar pistols with the G23 being a tad smaller). This features a full metal body which is NOT the same as the real Glock; the real thing has a polymer lower receiver with metal slide; but for the case of a Springer pistol this metal body does work in the pistol’s advantage – the metal makes this slightly more robust than the other cheaper spring pistols on the market meaning this should last much longer and withstand more “bumps and knocks” than a cheaper model. This gun is ideal for target shooting or as a prop.

The Real Life Glock 23 is chambered in .40 Caliber and is intended to be as light and compact as possible while still delivering a high capacity magazine; the G23 is a very popular pistol with law enforcement agencies around the world due to its high stopping power coupled with its reliability and simplicity.

This bb gun version is one of the more sturdy spring pistols available, The zinc Alloy Shell makes it feel weighty and solid, and it has a nice easy grip trigger, the mag is also made of metal and the gun its self is painted in a blue finish.

The gun has a small rail on the underside of the barrel just forward of the trigger guard that you can attach a laser or torch etc. there are front and rear fixed iron sights on the top slide of the pistol.

When used outdoors, shooting at a reasonable 200~250Fps means you have no real risk of breaking pots or greenhouses! As with our range of introduction springers, this weapon is perfect for target shooting and for training younger members of your family how to look after a weapon and how to be safe when using one - simple things such as ensuring the magazine is empty after use, not pointing it at anyone who doesn't have eye-pro on, etc.

This does make a great gun for younger players looking to choose their first gun of their "own" as it has a slightly different look than some other springers, but is functional enough to be fun to shoot in the garden - it will work perfectly with 0.12's or 0.2's. On testing, very accrete and powerful with 0.20g pellets; it comes with a small pack of 0.12g pellets in the box.

This is a Spring BBGun Pistol, so that means it's powered by a spring and that must before cocked for each shot.
It's economical to run and easily maintained as it requires no gas or batteries to operate.

As you might expect for the price, this is no TM standard gas blowback pistol, and as such should NOT be treated as such - this is not going to outrange any AEG's, it is not going to last you many years of constant use, however it is certainly not going to take a chunk out of anyone savings! at a pocket-friendly price, this weapon is more than worth its price in the amount of fun it could provide to a new player looking for a nice target shooting pistol.

We also sell this gun in a few other colours, if you don't like this colour just search on the site for "g15"

Here is a collection of articles to help give you an informed decision to help you buy the best spring pistol bb gun that suits your needs.