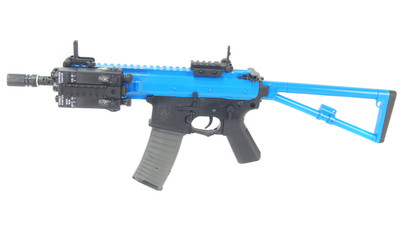 The Dboy/Double Bell BY-806 is a replica of a Knight's Armament Company PDW.

The Knight's Armament Company PDW Was designed in 2006 and is used by the United States Secret Service, The rifle is basically a shortened M16 rifle lower receiver, with the cartridge, upper receiver, and operating mechanism new designs by KAC. as it is based on the M4/M16 operating controls will be familiar most users.

This BB Gun PDW is a lightweight ABS Plastic body rifle, that is great for close quarter battle (CQB), with its side-folding skeleton stock its a really compact gun that through's down some heavy fire, measuring in at just 450mm when folded.

Its got flip-up adjustable and removable front and rear sights, and an extensive rail system. The mock PEQ/Battery box that fix's to the rifles RIS Rail also has a rail on it. Other features of the rifle are the markings on the airsoft guns receiver, and the working charging handle that when pulled back reveals the adjustable hop-up system via the dust cover.

the rifle has a metal gearbox.

The 300 round magazine included in the box is made of ABS plastic, and a bonus feature is that most standard M4 Magazines will fit the rifle so if you have some laying around you can use them or if you want more they are super easy to find. its also designed so that when the stock folds, you can still release the magazine from the rifle.

Internally the BY-808 rifle has en entry-level Dboys V2 gearbox which is made of polycarbonate, its has a good rate of fire and shoots around 270fps with 0.20g bb pellets.

The BY-806 is a great entry-level to intermediate airsoft gun, for indoor Airsoft Skirmish games, at a really great price, and its compact size and light weight make it a joy to run around and play with.

The gun does not come with a charger or battery, but you can buy them by clicking on the links below.

Please note this gun does NOT come with battery or charger!

Here is a collection of articles to help give you an informed decision to help you buy the best electric rifle that suits your needs. this advice is not specific for this gun but electric rifles in genral.